With the great fortune of being able to hold an ANZAC commemoration for the entire school, indoors, with everyone seated in our magnificent Gymnasium, we participated in a very poignant Assembly on the Friday prior to ANZAC Day. Our invited guest, Squadron Leader Arthur Icomomou (from the Royal Australian Air Force) led our commemoration and addressed our students. Having had deployments in Iraq and Afghanistan (and receiving ‘Commendations’ from the Australian Defence Force and the United States Air Force for his leadership in both arenas of conflict) he was able to speak with great insight and authority of the many challenges of war. Sqn Leader Iconomou offered an outline of the Gallipoli campaign and how, even in defeat, it was such a formative event for both the fledgling Australian forces and for the development of such a strong sense of unity with New Zealand. Further, he spoke of how the concept of ‘mateship’ emerged from the terrible battles of the First World War and became an entrenched and valued attribute for Australians.

We were reminded of how impressive our students are on such occasions, when we observed a minute’s silence. You could have heard a pin drop and the silence and respectful lack of movement lasted the full minute – a very moving occasion.  Many schools run ANZAC commemorations and it is our hope that our young can continue to learn of and appreciate the contribution of servicemen and women in past years and the suffering of all those who have served. Finally, and as the ANZAC Day Commemorative Committee notes:
“We have a legacy of responsibility that the heritage fought at so costly a price should not suffer in our hands; so that the word ANZAC does not so much commemorate an event as a standard of character in action which we must maintain in all circumstances – in peace as in war.” 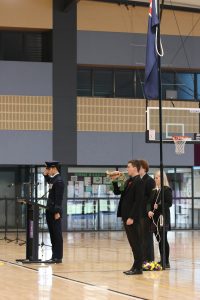